Egyptian National Railways is considered to be the first railway lines established in Africa and the Middle East, and the second in the world after the United Kingdom, where construction began in 1834, when the railway tracks were actually extended to Suez-Alexandria line.

However, the work was stopped due to some political reasons. Subsequently, the idea was revived in the fifties of the nineteenth century in 1851 to reach all over Egypt’s governorates.

The first railway line in Egypt was extended between Cairo/Alexandria. It was established by an English company during the era of Khedive Abbas I, who took over the power in Egypt in 1848, and lasted six years until 1854. The purpose of extending the railways lines in Egypt was to facilitate and accelerate the transport of mail and travelers between Europe, especially England, and India, which was England’s largest colony in the East. Transportation between Europe and Egypt was Egypt, where ships came from Europe to Alexandria Port, then were transported by road to Cairo, then to Suez Port so as to travel in the Red Sea and the Indian Ocean to reach India. The English company asked the help of Robert Stephenson, the son of the inventor of the steam train, to set up this project, which is regarded as the first of its kind in the Mashreq, where Khedive Abbas I signed a contract with Robert Stephenson with a cost of 56 thousand English Pounds to establish a railway linking between the Egyptian capital and Alexandria with a length of 209 kilometers. He supervised the job of bringing all equipment needed for the project. The work finally began in 1852 and was completed in 1856.

The year 1854 witnessed the running of the first locomotive on the first railway line in Egypt between Cairo and Kafr El-Zayat City in Delta region. The first railway line between Cairo and Alexandria was completed in 1856. Two years later, the second line was inaugurated between Cairo and Suez, and then the construction of Cairo/Port Said line began after two more years. Moreover, in 1887, they started to consider the establishment of a railway line in Upper Egypt. In the era of Khedive Ismail, the railways were rehabilitated, besides exerting a great effort by Khedive Ismail made to extend the railways throughout the country to spread construction and facilitate the movement of trade and transportation among different regions.

Railways lines were extended from the far south of Egypt - south of Wadi Halfa - to the far north - Alexandria - as well as the cities of Delta and Al-Fayoum. In 1898, the construction of the third railways line started from Cairo to Luxor. A private company, under the name of Qena Aswan Railways Company, was established and took over the mission of extending the railways line to Aswan in The far south, as after the British entered Sudan in 1899, the occupation authorities decided to amend the train line from Luxor to Aswan and then the first waterfall in the far south of Egypt to become a normal extension of the railway network in Egypt. That project was completed in 1926 as the line was extended to Wadi Halfa within the Sudanese borders. "

Egypt entered the era of suburban trains when the Helwan trains line connecting the center of Cairo with the Helwan suburb was extended during the period from 1870 to 1872. Soon after that, the cities trains (trams) spread in Cairo and were managed by a Belgian company and a French company. These trains became the first public transportation means in the capital of Egypt during the first quarter of the twentieth century."

During the First World War, the British began thinking about establishing a railway connecting Egypt with Palestine to serve the war effort. The work to build the line from Qantara Sharq on the eastern bank of the Suez Canal to Gaza actually began and completed in 1918, leading to the outbreak of the First World War 1914 – 1919. After that, the outbreak of World War II 1940-1945 increased the importance of the railways for the British to use these lines for transporting supplies, ammunition and soldiers, of which the main reliance became on those lines for transport. "

After 23rd July 1952 Revolution, the revolution government paid attention to develop these lines and supply them with vehicles to transport citizens. The interest in building the High Dam led to the interest in railways lines for transporting the necessary construction tools and materials for workers in this huge project. The state at that time relied in its plan to develop the railways facility to raise the efficiency of the infrastructure of the railways network, representing in the renewal and maintenance of railways, the development and support of the fleet of rolling stock, raising the efficiency of performance, as well as developing the transportation service by introducing new trains and raising the levels of safety means by developing electrical signalling and renewing level crossings and means of central control, in addition to developing a range of workshops to meet the obligations of periodic maintenance of rolling stock for transporting passengers and freight by railways. "

It is worth mentioning that ENR owns 9570 km of railways tracks, serves 23 governorates as well as transporting approximately 420 million passengers annually. ENR has 705 stations, 1332 level crossings, 3040 passenger coaches including 850 air-conditioned coaches, 8553 wagons, 793 locomotives, 826 bridges 100 tunnels, 6 regions, 9 sectors, 8 subsidiaries, 191 million square meters of land valid for investment, in addition to 11 billion pounds representing ENR's investment plan for the year 2019/2020. ENR plays an effective role in the service of passengers and freight transport all over the republic where railways link all major ports through railways connections.

After the attentive concern and support that the political leadership pays to the railway facility, especially in light of the assignment of the transport ministry wallet to His Excellency Lieutenant-General / Kamel Al-Wazeer, ENR has implemented a plan executed in parallel with carrying out a comprehensive development for the facility in terms of developing stations, constructing fences along tracks both sides soa s to protect ENR’s property in addition to modernizing the signalling systems in most of the lines, including renewing tracks and developing level crossings. ENR’s rolling stock has recently gained the lion’s share where contracts for purchasing new locomotives and coaches have been entered into, which will be supplied through stages.

which will make an unprecedented shift in the traction fleet and coaches in ENR as more safety, security and comfort means have been considered, thus contributing to improving the level of services provided to the public, aiming at achieving a happy trip through ENR trains. 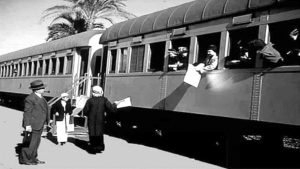 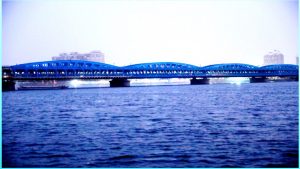 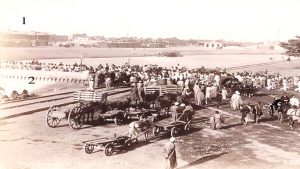